Here you can find 10 finalists of Pepsi MAX Sound of Tomorrow 2019 competition: https://www.mixcloud.com/pepsimaxthesoundoftomorrow/

March 27th you can vote for the 3 final Remixes here:

The Masquerade by Clapton |Pacha

The Masquerade by Claptone is a place where one can live out their deepest desires, an extraordinary atmosphere, full of masked faces and talents! 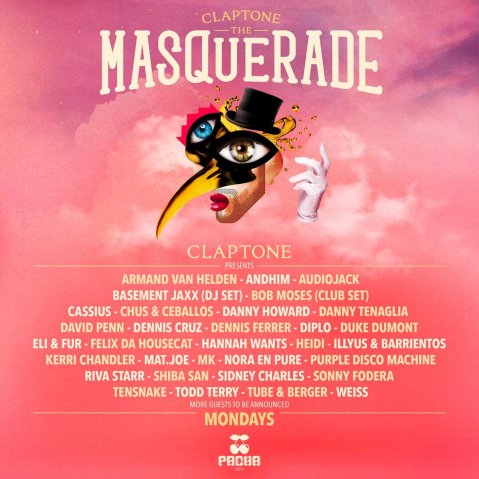 Moments presents Discwoman is a series of shows, panel discussions and workshops aimed at encouraging more women and gender minorities to get involved with electronic music. Emma Hall-Philips, the founder of local collective Moments, tells Katie Meadows what it’s all about.

Since its inception in 2014, New York-based collective Discwoman has become so much more than just a club night. These days it’s globally recognised as a fully-fledged booking agency and event platform dedicated to promoting electronic music by women and gender minorities. Emma Hall-Phillips, who runs local collective Moments and DJs pretty much every weekend as Aw B, has brought Discwoman founders Frankie Decaiza Hutchinson, Christine McCharen-Tran, Emma Burgess-Olson and collaborator DJ SHYBOI to New Zealand for two shows this week in Auckland and the capital. Each show will be accompanied by a DJ workshop, and a free-entry discussion panel on diversifying the electronic music industry, creating inclusive spaces, and throwing sick parties.

What got you into DJing and the electronic music scene and when and why did you start Moments?

Emma Hall-Phillips: I started DJing three years ago – March 2016 was when I had my first set. I saw k2k [Katherine Anderson] DJ at an A Low Hum new year’s party, and that was the first time I was like, “This is something I can do,” because I saw someone who represented me. I did two casual lessons with her and she got me on a lineup with Inky Waves [now Night Pottery] a few weeks later. I played my first DJ set at a house party in Wellington, it went really well and I loved every moment of it. From then I’ve been DJing almost every weekend. Over summer I played at Rhythm & Vines, Wondergarden, Splore, and I also played Daydreams in Melbourne.

In the past I had put on gigs for [guitar] bands. I wasn’t performing music at all until I DJed for the first time, but I’d always been in the music scene. I used to put on gigs for friends very occasionally, but it wasn’t until I learnt about Discwoman and saw what they were doing that I knew I wanted to do something similar, and actually put on parties under a brand and do that as a profession. So that’s kind of how Moments started in 2016. I had my first party in the S&M’s basement [in Wellington], and on that lineup was someone else I had taught how to play [Angel X]. Since Katherine taught me how to DJ I’ve ended up teaching a lot of other people how to spin too. 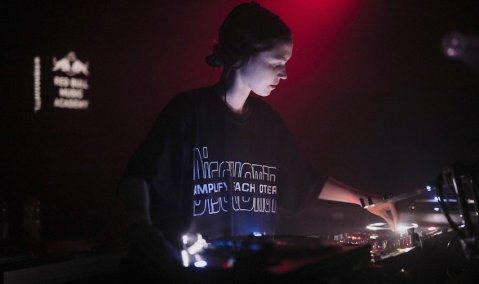 I think that men do work together a lot, but I was never really invited to those sessions. Even if I was around it, I was never offered a go, or if someone was gonna teach me how to do something it would be like, a 10 second thing and then it would be over. It was never like, “I’m gonna commit to helping you do that.” So I think finding other people who have time for you and want to create a non-judgmental space is really important, which is what Katherine provided to me, and that’s what I want to provide for other people who are keen to learn. A few times now I’ve met up with complete strangers and mixed with them. I just wanna try help other people to learn!

Why did you want to bring Discwoman over to New Zealand?

I think Tom [Mongo Skato] was the first person who told me to check them out. I researched into them for a uni project once. I had never really seen a collective like that before, that was so unapologetic and so vocal about what they believe in and stand for, and doing it in such a bold way, like they’d call people out on the internet. It wasn’t just because of their ethos either; they collaborate on really amazing parties and represent a huge varied pool of artists. They’re not genre-specific. The only requirement is that you are not a cis-man.

They started as a two-day party at a bar to showcase female, non-binary and queer talent, and after they saw how successful that was and how necessary it was for the community they turned it into more parties, then a booking agency. They’ve put on shows, done panel discussions and held workshops all over the world. I’m still pretty new to the electronic scene — I’ve only actively been in it for about three years — but I’ve seen so many other similar collectives pop up around the world since Discwoman started. It shows how influential they are.

So alongside the shows in Auckland and Wellington, you’re going to host some panels and workshops.

Discwoman are gonna be in Wellington on Friday [May 3rd] and I’m going to be hosting a panel discussion with them, and after that UMFANG [one of Discwoman’s founding members] is running a DJ workshop, then we’re running the same events the next night in Auckland. I should note that the DJ workshops are full, but I’m also planning on running some more workshops throughout the year. The panel discussion will be talking with Discwoman about what the collective is and also general music industry-related stuff — it’s open for anyone to come to and free. It will be really good for anyone who is interested in Discwoman already, but even if you don’t know who they are it will still be a really interesting conversation with people who, in five years, have built an incredibly successful business out of their parties. So panels and workshops during the daytime and techno parties in the nighttime.

Why is it important to you to have diversity in a lineup?

It’s important to represent all types of people because that brings a more diverse crowd, and a diverse crowd creates a safer space because it’s more inclusive. I also think it’s just boring seeing the same people doing the same thing all night. I do know that a lot of my lineups so far have been very white, and that’s definitely something I want to work on improving as a promoter. I don’t want to say my parties are perfect, because I definitely know that if I look at my past lineups they’re not. I should be doing better, and that’s what I’m always trying to do.

Why do you think promoters aren’t trying harder to diversify their lineups?

I think because it’s “easier” for people to just go to shows, see who is playing, then they just book those people instead of doing research or trying to find other people who may have never played a show before. They just wanna book the people who are doing well at the moment, and the majority of the people that are doing well at the moment are men because it’s still such a male-dominated scene. I’ve been lucky to have success playing, but I feel like sometimes I am just being booked for being a woman. But I also know that I’m really good at DJing.

What’s the worst excuse you’ve been given by a promoter for a lack of diversity in a lineup?

What’s your dream for Moments in the future?

I want to continue running DJ workshops and throwing parties, and eventually I want to do a festival. I definitely want to do more practical things like the workshops to help the community for the long-term, not just be someone that puts on parties. DJ equipment is expensive and pretty inaccessible to a lot of people; the scene is definitely missing out on amazing talent who just don’t have the tools to start.

The full line-up of the Moments presents Discwoman series is:

Threadlog is the fastest weblog for Electronic Dance Music. We feature all about your favorite sound!